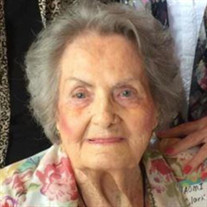 Naomi Clark passed from this life peacefully at home on August 16, 2020 at the age of 96. She was born in Laurel, MS on June 30, 1924 to Claiborne Adkins and Elsie Musgrove Adkins. In 1952, Naomi married Belvin Ingram. They had two daughters, Donna Watkins Cochran and Debbie Walters. Belvin preceded her in death on November 15, 1959. Naomi Clark ('Nanny' to those she loved most) loved to cook and for years cut out and collected recipes, mostly from the newspapers and magazines, so that she could make them for her family.Even though everything she cooked was delicious, she was most famous for her chocolate cake. Although, everyone in the family tried to recreate HER chocolate cake, no one could make it taste quite like Nanny's. She had the special touch because she was a special lady and her cake was just one thing in her life that represented that. There will only ever be one Nanny. Nanny knew the importance of hard work. She was a hairdresser and owned her own beauty shop in Soso for 30 years. Her hands were always busy, so after she retired, she busied herself embroidering and making quilts and even entered some at the fair for which she won blue ribbons. Her latest endeavor was learning Roman numerals. Why? Because her book of daily devotional Bible verses were written in Roman numerals, and she wanted to know what chapter and verse she was reading. She had her oldest great granddaughter (who lives in AR) mail her a list of all the Roman numerals so that she could learn them. Only someone as determined as Nanny would start that kind of endeavor at 96. Once she had her mind set on something, she was undeterred. It's just another special thing about her. Her love of learning was contagious and she instilled in her family the importance of life-long learning. She always made sure to encourage her family in pursuing education, and we always knew she was as proud of us, no matter what grade we got in school. Nanny also loved having a beautiful yard full of flowers. Over the years, she had blooms and bushes of every color, size, and shape and was all about getting a cutting from someone and starting her own plant. Her life was marked by doing things her way. Nanny's way. It was just one more thing that made her special. If it's not obvious by now, she was a very special person who we loved dearly. These are just small glimpses into the lady we called Nanny, but her passing leaves a big hole in our hearts and lives. Naomi was preceded in death by her beloved husband, Belvin Ingram; her parents, Claiborne Adkins and Elsie Musgrove Adkins; her brothers, Lafroy Adkins, Jack Adkins, and Devoy Adkins. Naomi is survived by her two daughters, Donna Watkins Cochran of Baton Rouge, LA and Debbie Walters of Laurel; two brothers, Kermit Adkins (Jerri) of Pensacola, FL and C. J. Adkins (Vicki) of Huntsville, AL; one sister, Norma Ruth Parks of Raleigh; sister-in-law, Doxie Adkins of Houston, TX; grandchildren, Shelby Watkins (Penny), Chad Watkins (Nikki), Jeremy Walters (Peter), and Casey Walters (Jessica); great-grandchildren, Daniel Watkins (Alaina), Sarah Naomi Watkins, Mary Watkins, Alexia Watkins, Emma Kate Watkins, Connor Watkins, Caroline Walters, and Catherine Walters. She is also survived by many nieces and nephews. Serving as pallbearers are Shelby Watkins, Chad Watkins, Jeremy Walters, Casey Walters, Daniel Watkins, and Peter De Salvo III. Graveside services will be held at Big Creek Cemetery on Wednesday, August 19, 2020 at 1 p.m. with visitation at the graveside beginning at 12:30 p.m. Shelby Watkins will officiate. Due to the Covid-19 pandemic, please wear a face mask and practice social distancing. To sign the online guest book www.memorychapellaurelcom.

Naomi Clark passed from this life peacefully at home on August 16, 2020 at the age of 96. She was born in Laurel, MS on June 30, 1924 to Claiborne Adkins and Elsie Musgrove Adkins. In 1952, Naomi married Belvin Ingram. They had two daughters,... View Obituary & Service Information

The family of Naomi I. Clark created this Life Tributes page to make it easy to share your memories.

Naomi Clark passed from this life peacefully at home on August...

Send flowers to the Clark family.