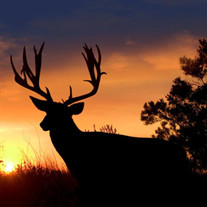 Nathan Allen Bush August 15, 1965 – September 9, 2021 Nathan A. Bush, age 56, passed away peacefully at South Central Regional Medical Center on Thursday, September 9, 2021. He was a husband, father, son, brother, uncle and mostly a friend to everyone he met. His kindness to others and love and devotion to his family was remarkable. Nathan was an avid fisherman and he loved hunting deer. His favorite place was his hunting camp where he and his crew of buddies made lasting memories. Nathan worked for Rowan Drilling Company for 20 years. There he met and made lifelong friends with the best of the best. He treasured his Rowan family and they were “family” right up to his passing. In April of 2014, Nathan was diagnosed with a rare, terminal brain disease called Multiple System Atrophy. It was an aggressive disease that deteriorated the muscles in his body. He had been completely bedridden for the last three years. Although stricken with this, he never once complained or had a bad day. Nathan was preceded in death by his father, Charles Dewey Bush and just recently his sister, Beth Patrick. Survivors include his wife of 31 years, Joni Merrell Bush, his son and daughter in law, Tucker and Hanna Bush, his mother, Ann Bush, brothers Jamey Bush (Sharon), Charlie Bush, Bobby Bush, sister Cathey Womack (Rob) and a host of wonderful nieces and nephews. Nathan loved his entire family. He often helped others and gave of himself willingly. His kindness, his laughter, and his sense of humor was immeasurable. He will be missed, loved and cherished all the days ahead. Services will be held at 11:00 a.m. on Monday, September 13, 2021 at Memory Chapel Funeral Home. Marc Herrington, one of Nathan’s greatest friends, will officiate. Visitation will begin at 9:30 a.m. prior to the service. Interment will follow at Lake Park Hills Cemetery. Pallbearers will be Eric Womack, Mark Womack, Jonathan Womack, Brian Womack, Matthew Lee and Casey Shedd. Honorary pallbearers are Chase McGee, Lance McGee, Nathan Do and all of his Rowan buddies. To sign the online guest book, please visit www.memorychapellaurel.com

The family of Nathan A. Bush created this Life Tributes page to make it easy to share your memories.

Send flowers to the Bush family.