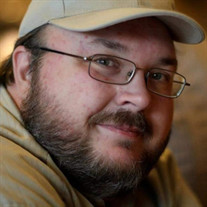 Patrick Carlos Cranford, age 50, passed away unexpectedly on October 10, 2021, at Centennial Medical Center in Nashville, Tennessee. Patrick was born on October 10, 1971, in Laurel, Mississippi to Robert Cranford and the late Clarise Hinton Cranford. He is survived by his father and stepmother, Robert, and Linda Cranford; brother, Scott Cranford; and special friend, Dixie Landrum. Patrick was an actor and an avid gamer. He loved to stream on Twitch and YouTube and often broke into one of the characters he created, Biller Bob or Buford, during his live stream. In the middle of a regular conversation, he would often slip into a character and have everyone laughing so hard tears would be rolling down their face, especially his dad. In his career, Patrick appeared in several films, music videos, commercials, and television working with noted actors and musical artists such as Taylor Swift, Toby Keith, and Larry the Cable Guy. He was also one of the founders of the Tennessee Ghostbusters. In addition to being a huge fan of TV shows and movies such as Star Wars, Star Trek, and Gilligan’s Island, he was also a fan of Back to the Future. After Back to the Future III premiered, Pat started writing his own version of the next movie, which would have been Back to the Future IV. His stepmother said he was an excellent writer. He and his brother Scott were more than brothers, they were best friends and have been together since Scott was seven years old. Pat will be greatly missed by all who knew and loved him. Go rest high on that mountain sweet Pat! A graveside service will be held Friday morning October 15, at 11 a.m., at Memorial Gardens Cemetery, 2151 Highway 184 East, with Dr. Scott Carson, president of Southeastern Baptist College, Col. Army Chaplain Ret. officiating. Memory Chapel is overseeing arrangements. In lieu of flowers, please make donations to your favorite charity in memory of Pat. To sign the online guest book, please visit www.memorychapellaurel.com

The family of Patrick Carlos Cranford created this Life Tributes page to make it easy to share your memories.

Send flowers to the Cranford family.