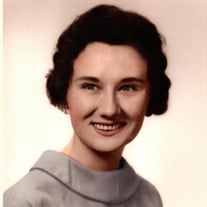 Peggy Ann Dodd Guy, 87, of Laurel, died Friday, February 4, 2022, at Jasper General Nursing Home in Bay Springs, MS. The eldest of five children, Peggy was born on July 29, 1934, to William Acie and Olitha Holified Dodd of the Calhoun Community. She was a beloved mother, sister, friend, and “Nanny.” To Peggy, family was everything. She took great pride in celebrating the lives and accomplishments of immediate and extended family. Her children, grandchildren, and great-grandchildren were her greatest joys. During her golden years, she considered it one of her greatest blessings to share her home with her grandchildren Cayley, Sarah, and Colby. Peggy was eternally optimistic. She met every morning with a smile and a coffee with two creams. Throughout her life, Peggy was known for her devoted faith to the Lord, her keen mind, and her love for numbers. From childhood, she was an active member of Calhoun Missionary Baptist Church, teaching both Sunday school and Bible school. She later attended Temple Missionary Baptist Church to worship with family. She daily expressed her faith by saying “God is good!” A proud graduate of Calhoun High School, Peggy was named valedictorian of the Class of 1953. She supported education and extra-curricular activities throughout her life. Peggy enjoyed many years in the role of bookkeeper at United Gas, Martin Merchandising, Southern Oil, Inc., and Logan Oilfield Services. She was preceded in death by her parents William Acie Dodd and Olitha Holifield Dodd; brothers Larry Acie Dodd and Michael Ray Dodd; sisters-in-law Lottie Thomas Dodd and Marie Morgan Dodd; and life-long friend Patricia Norris Finnegan. She is survived by two siblings, brother Eddie Dodd (Nell) of Laurel, and sister Linda Dawkins (Don) of Cleveland, Tennessee; two daughters, Lisa Caves (Glenn) of Soso, and Angela Tolbert (Michael) of Laurel; six grandchildren, Will Caves (Whitney) of Clinton; Cayley Shedd (Casey) of Heidelberg; Drew Caves (Victoria) of Starkville; Erik Caves of Kansas City, Missouri; Sarah Brownlee and Colby Brownlee both of Laurel; and four great grandchildren, Lily Caves, Parker Shedd, Rowan Shedd, and Raider Stewart. Visitation will be held from 12:00-2:00 P.M. on Wednesday, February 9, 2022, at Memory Chapel in Laurel. Services will be held in the chapel at 2:00 P.M., with burial to follow in Calhoun Cemetery. Brother Cliff Jenkins of Temple Missionary Baptist Church will officiate. Pallbearers will be Will Caves, Drew Caves, Erik Caves, Casey Shedd, Darron Dodd, and Danny Dodd. Honorary pallbearers will be Colby Brownlee, Scott Dodd, and Mark Dodd. “His lord said unto him, Well done, thou good and faithful servant; thou hast been faithful over a few things, I will make thee ruler over many things: enter thou into the joy of the Lord.” -Matthew 25:21 KJV To sign the online guest book, visit www.memorychapellaurel.com.

The family of Peggy Ann Dodd Guy created this Life Tributes page to make it easy to share your memories.

Send flowers to the Guy family.