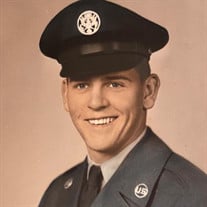 Mr. Preston Edward Kenneth (Pete) Hanna age 87 of Laurel, Mississippi passed away Saturday, January 22, 2022 at SCRMC. He was born September 14, 1934 in Laurel to James B. Hanna and Ora Nell Goodwin Hanna of Laurel, Mississippi who preceded him in death. Also preceding him in death; three brothers, James (Jimmy) B Hanna Junior, John T Hanna, and Don L Hanna. He is survived by his bride of 63 years, Jeanette Vinzant Hanna; by his four children, Kathy Hanna Ingram (Jerry), Jenny Hanna Ishee (Mark), Mark Hanna (Angee), and Amy Hanna Rowell (Stan); grandchildren, Adam Ishee, Kandi Ingram Mott, Matthew Hanna, Natalie Hanna Lyles, Hope Rowell McDonald, Aaron Ishee, Daniel Rowell, and Luke Hanna; great grandchildren, Kylie Johnson, Hanna Claire Ishee, Remy Lyles, Noah Ishee, Juliana Busby and Ila McDonald; and one sister, Sarah Hanna Campbell. His wife, children, grandchildren, and great-grandchildren were the loves of his life. Mr. Preston (Pete) served in the United States Air Force early in life for a 4-year term. He met my Mama and married her a couple of years after he got back to Laurel from his military service. Mr. Pete worked several jobs in his years as a young father, but then worked many years as a dispatcher for Entex gas company and later retired from Mississippi Valley Gas Company. He was saved when his two oldest daughters were very young, and he always expressed his gratitude toward his Lord and Savior Jesus Christ! He measured his success and wealth by knowing that he was a Christian Father that made sure all 4 of his children knew Jesus and were saved. Mr. Preston (Pete) was an active deacon for many years at Magnolia Baptist Church. He was loved and described by his family and friends as being a kind and happy man. We, his family, always referred to him as our songbird for he was always singing Jesus’s name. Visitation will be held at Memory Chapel Funeral Home in Laurel, MS on Wednesday, January 26 beginning at 1:30 p.m. until the service time at 3:00 pm. Interment will follow to Hickory Grove Cemetery Bro. Matt Olson will officiate. Pallbearers will be grandsons; Adam Ishee, Matthew Hanna, Aaron Ishee, Daniel Rowell, Luke Hanna, and great nephew Preston Smith To sign the online guest book, please visit www.memorychapellaurel.com

The family of Preston Edward Kenneth "Pete" Hanna created this Life Tributes page to make it easy to share your memories.

Send flowers to the Hanna family.