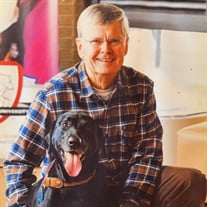 Rhes Vernon Low, a life-long resident of Laurel, passed away loved and revered by his family and friends on Tuesday, March 10, 2020. The Lord graciously allowed Rhes to walk this Earth for 72 years and spread the love of Christ throughout his family, fellowship and business. As a product of living a life devoted to Christ, his time was spent dedicated to serving others. He served his wife as a dutiful and loving husband; he served his children as a wise and doting father; he served his buddies as a loyal and devoted friend; and he served his community as a patriotic, hardworking citizen and businessman. Rhes was a member of First Baptist Church where he was a deacon, children’s Sunday School teacher and member of his long-time men’s Sunday School class. At 12 years old, in the halls of First Baptist of Laurel, he first saw his wife Marsha and remained by her side for the rest of his life. They were married for 49 years. He was a co-owner of United Roofing and Construction Company before retiring to manage his property holdings and investments. As an added perk to his love of work, he spent eight years working as a real estate appraiser with Edward Boone Appraisal. Rhes was a member of the Laurel Airport board, Veterans Memorial Museum board, a life honor member of the Rotary Club and former President of the Trustmark Bank board. He loved (and sometimes did not love) the athletic events of his alma mater, The University of Mississippi. In addition to time spent in Oxford, Miss. watching football, basketball, baseball and communing with family and friends, Rhes loved spending time in Orange Beach, Alabama. Whether sitting in his chair watching his grandkids play or taking a late afternoon cruise in his boat, he found immense joy in the salty air. Everywhere he went, he was accompanied by his four-legged rambunctious sidekick, Molly. Rhes was preceded in death by his mother and father, Jo and John Low, his father-in-law Bernard Shuff, his brother-in-law, Mitchell David Mauldin, and Avery Belk his great niece. He is survived by his wife, Marsha Shuff Low, his children, Rhes and Alden Low of Oxford, Miss., and Lindsay and Bret Beauchamp of Oxford, Miss.; his grandchildren, Mattie Beauchamp, Rhes Low III, Luly Beauchamp, Hardy Donahoe, Holland Low, Grier Low, all of Oxford; and his mother-in-law, Mattie Shuff. He is survived by his siblings, John Low IV (Elizabeth) of Amelia Island, Fla., Lucy Helveston (John) of Laurel, Miss., and Tineke Kermicle (John) of Olney, Ill.; his in-law’s, Kay Belk (Jim) of Ellisville, Miss., Patty Anthony (Joe) of Laurel, Miss., Cheryl Johnson (Bill) of Foley, Ala. Services will be held on Friday, March 13, 2020. Family and friends will be received in the Family Life Center of First Baptist Church from 9:30 a.m. until 11:15 a.m. with the funeral service following in the Sanctuary of First Baptist Church at 11:30 a.m. Interment will be at Hickory Grove Cemetery. Dr. Randy Turner will officiate. Serving as pallbearers are: Mickey Mauldin, Denny Read, Larry Callahan, Bill Renovich, Dick Yoder, Steve Ellis, Tommy Thames, Chauncey Tanner, Jim Johnson, Freddy Rayner. Honorary: The Men of Tom Blake’s Sunday School class. To sign the online guest book, visit www.memorychapellaurel.com.

Rhes Vernon Low, a life-long resident of Laurel, passed away loved and revered by his family and friends on Tuesday, March 10, 2020. The Lord graciously allowed Rhes to walk this Earth for 72 years and spread the love of Christ throughout his... View Obituary & Service Information

The family of Rhes V. Low created this Life Tributes page to make it easy to share your memories.

Rhes Vernon Low, a life-long resident of Laurel, passed away...

Send flowers to the Low family.