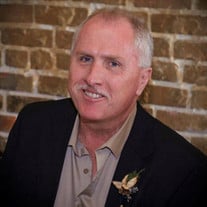 Robert Dale Sims, known to friends and family as Dale, was born in Laurel, Mississippi on October 30, 1958 and departed from this life on October 31, 2020 at the age of 62. He was preceded in death by his parents, Bill and Betty Sims of Stringer, MS; brother-in-law, Billy Wayne Lampkin; and father-in-law, Angelo Lampkin. He is lovingly remembered by his wife of thirty-six years, Angela “Angie” Lampkin Sims; daughter, Sonya Sims Myers (Stefan); mother-in-law, Dorothy Lampkin; sister-in-law, Mary Chancellor (Rodney); and special cousin, Fred Pitts. Dale graduated from Stringer Attendance Center in 1976 and Jones College Auto Mechanics Program in 1977. Dale devoted his forty-three year career to auto part sales with Motor Supply, Kenney’s Auto Parts, Reliable Supply, Mid-State, and lastly, O’Reilly’s Auto Parts. His regular customers valued his vast auto parts knowledge and custom paint-mixing expertise. Throughout the 1990s, Dale served on the Sharon Volunteer Fire Department as an EMT, First Responder, and Assistant Fire Chief. As an organ donor, Dale will continue to help others as his final act of selflessness. A memorial service will be held graveside at Lake Park Hills Cemetery on Saturday, November 21, 2020, at two o’clock in the afternoon. Long-time friends, Reverend Steven Holloway and Sharon VFD Chief, Mike Hodge will officiate. In lieu of flowers, memorial donations may be made to Sharon Volunteer Fire Department: Sharon VFD c/o Sharon Water Works 4173 Sharon Rd. Laurel, MS 39443 The family asks that all who attend the service wear a mask and observe social distancing. Dale was the definition of a hard worker; a trait instilled into him from growing up farming land, poultry, and cattle. He constantly kept busy, whether at work or at home. The grass never got too tall, as he frequently cruised the yard on his riding mower while wearing his straw hat. When he was not tinkering around the shop, he could be found on the couch watching Sci-Fi, the History channel, or the back of his eyelids as his snores reverberated through the walls. A jack-of-all-trades, he had an array of hobbies throughout his life including carpentry, auto painting, auto mechanics, scuba diving, fishing, competitive sharp shooting, and antiquing. He possessed a plethora of wisdom and an innate way of knowing how to fix just about anything. In 1984, he married the only woman who loved him enough to sign on for a lifetime of washing his dirty socks. A few years later, the couple became parents and complete as a family of three. He was a fiercely overprotective father to his daughter, no matter how old she was. Friends and family could steadily rely on Dale. He made time to be there for people. A true animal lover, he had a soft spot for nearly all of God’s critters, with the exception of the armadillos that made a mess of his lawn. Dale was an enigma of a man. He could be intensely private and outwardly serious. This combination made him very convincing to those who were unaware of his dry humor and sarcastic ways. Always quick witted, he got great enjoyment from tricking anyone into believing one of his elaborate tall tales. To quote one of Dale’s catch phrases, “at this stage of the game,” life will not be the same without him. He is loved and greatly missed by many. To sign the online guest book, visit www.memorychapellaurel.com.

Robert Dale Sims, known to friends and family as Dale, was born in Laurel, Mississippi on October 30, 1958 and departed from this life on October 31, 2020 at the age of 62. He was preceded in death by his parents, Bill and Betty Sims of Stringer,... View Obituary & Service Information

The family of Robert Dale Sims created this Life Tributes page to make it easy to share your memories.

Robert Dale Sims, known to friends and family as Dale, was born...