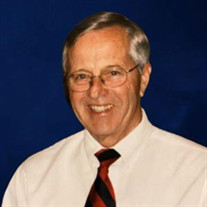 Mr. Robert Henry Read, III, went peacefully to be with our Lord at the age of 83 on Wednesday, May 19, 2021, at his residence in Laurel, Mississippi. He was born to Robert Henry Read, Jr., and Rosa Lee Read of Paulding, Mississippi on February 17, 1938. A loving husband and father, Mr. Read is survived by his wife, Kathy Gibson Read; four sons, Richard Read (John d’Addario), David Read, Frank Read (Melissa), and Paul Read (Molly); seven grandchildren, Sawyer, Mason, Layton and Ann Claire Read, Lauren and Chandler Nichols plus another baby girl due in September; two step-children, Donna Nichols and David Holifield; his brother, Dennis Read (Mary); dear family friends, H.W. Holleman (Jackie) and Peter Bowling among numerous other admired relatives and friends. An avid Ole Miss fan, Mr. Read graduated from the University of Mississippi’s School of Pharmacy in 1962, and he served as a preceptor from its inaugural year in 1974 to 2017. He proudly opened Read Discount Drugs in Laurel in 1970 where it continues to serve the residents of Jones County today. He was a board certified pharmacist in Mississippi, Louisiana and Florida. Mr. Read was a member of the MS Board of Pharmacy for over 20 years, serving as the Board President in 1971 and again from 1985-1991. He was also a member of the Mississippi Pharmacists Association where he served as President in 1979. He was later recognized by MPHA for his community service and as Pharmacist of the Year. Mr. Read was also a dedicated member of his community. He was a longtime faithful member of First Baptist Church of Laurel where he served on the Foundation Committee, the Finance Committee and as an usher. He also served as a board member for The First and South Central Regional Medical Center. A lover of nature, Mr. Read and his sons were recognized with the Outstanding Wildlife Conservationist award in 2003. Visitation will be from 9:30-11:00 a.m. on Friday, May 21, 2021 at First Baptist Church of Laurel with the funeral immediately following at 11:00 a.m. then interment at Lake Park Hills Cemetery. Dr. Randy Turner will be officiating the service. Pallbearers will be Dr. Thomas Blake, Tom Chambers, Dr. Jack Evans, Dr. Doug Jefcoat, Jim Laird and Chandler Nichols. Honorary pallbearers are H. W. Holleman and Dr. Thomas Anderson. In lieu of flowers, the family asks that donations be sent to the Foundation Fund at First Baptist Church of Laurel or the Alzheimer's Association. To sign the online guest book, visit www.memorychapellaurel.com.

The family of Robert H. Read III created this Life Tributes page to make it easy to share your memories.

Mr. Robert Henry Read, III, went peacefully to be with our Lord...

Send flowers to the Read family.