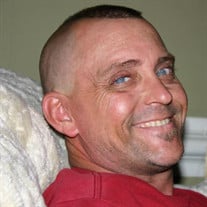 Robert Michael Rivers, Jr. (Robby Rivers), 50, passed away peacefully on May 26, 2021 in Laurel, MS with his father, brother, and two children by his side. Robby was born on July 25,1970 in Laurel, MS to his parents Robert Michael Rivers (Mike) and Sandra Whatley Welch of Laurel. Robby was a 1988 graduate of West Jones High School, and went on to become a very skilled welder after graduation. Robby later moved to Coral Springs, FL, then Tomball, TX with his family where he became widely known for his welding skills, and provided a good life for his wife and children. He made many friends along the way, and stayed in constant contact with them all. Robby was always known for his infectious smile, his joyous laugh, and his love of cars, guns, karaoke, and neon shoes. Robby was always a fun loving person who will be remembered for his love of people, his joyous laughter, his untamed goofiness, and his quirky personality. He was fun to be around and very playful, but could always be counted on when you needed a shoulder to lean on and friendly advice. He will be greatly missed by those who love him. Robby was preceded in death by his grandparents Robert E Rivers, Bonnie Kate Garvin Rivers, Charles Ray Whatley, and Vivian Lanell Sims Whatley, all of Laurel, MS. Robby was survived by his father, Mike Rivers, his mother, Sandra Welch, his brothers Matthew Rivers and Christopher Bustin, his son Michael Rivers, his daughter Rachel James, his girlfriend Stacy Beech, and a multitude of nephews, aunts, uncles, cousins, and other family members. A graveside service is scheduled for 10:00 a.m. on Saturday, May 29, 2021 at Shady Grove Cemetery at 4514 Hwy 15 N, Laurel, MS 39443 where all family and friends are welcome. Bro. Jason Goodwin of Shady Grove Baptist Church will officiate. Pallbearers will include Steve Welborn, Mark Rivers, David Rivers, and Michael Sims. In lieu of flowers, the family requests donations are made to Mission at the Cross of Laurel, MS (www.missionatthecross.com) and Love in Action of Laurel, MS (601-649-1684, 234 Hwy 28, Laurel, MS 39443) To sign the online guest book, visit www.memorychapellaurel.com.

The family of Robert Michael Rivers, Jr. created this Life Tributes page to make it easy to share your memories.

Send flowers to the Rivers, family.