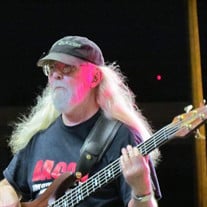 Ronald David “Ronnie” Goss, age 71, well-known local bass guitarist, passed away Oct. 6, 2020. He suffered a stroke July 28, 2020, with a second one soon afterwards. He was cared for in his final days by his sister, Linda Goss Jones, of Laurel. He is also survived by a stepson, Kenny Filmer, of New York. He will be missed by cousins, friends, and fans. Ronnie was born in Laurel, MS on June 14, 1949, to Ernest L. Goss and Syble Bush Goss, both of whom pre-deceased him. He received his musical gift from both sides. His mother’s family was musical, and he was also influenced by his dad’s skill with the guitar and mandolin. Ernest used to play live in the “old days” at radio station WLAU. Early in life, Ronnie began playing music and achieved his own following as a bass player. He was highly respected as a ‘copy’ player and worked hard to authentically play a song’s bass line, helping his fellow musicians and listeners to “get in the groove.” One of his earliest gigs was with the high school group, The Astrons. He played in countless venues for over 50 years around the Laurel/Meridian area with The Cracker Jacks, Grecian Urn, Dirty Dogs, The Stuntmen, Black Sheep, Fatback, The Blues Messengers, The Slackers, Jagged Edj, The House Rockers, and Classix. His career path was in music as well, beginning at Clinton-Harrington in the late 1960’s, expanding to Mississippi Music, and retiring from Peavey International. A brilliant intellect and analytical thinker, he was an innovator and great problem solver. Ronnie was keenly interested in guitars and electronics; immediately understanding complex circuits, projects, and situations which made him an invaluable manufacturing engineer in product development. His admiration for uniquely made American guitars developed into a nice collection of instruments. In retirement, Ronnie’s analytical skill was used in volunteer work for OLMM, the social media page for Old Laurel Mississippi Memories. Ronnie delighted followers with his ability to unfailingly track down the answer to any question about Laurel history, and often found a photo as well! He worked on family genealogy with the same tenacity. Ronnie married Flora “Jean” Tillman in 1987. They spent happy years together in Meridian. A light was extinguished in Ronnie’s life when Jean passed away of cancer in 2012. Playing music got him through tough times, so he played on, his signature long white hair blowing in the wind, until one day, he just didn’t. Over the years, thousands of people enjoyed his music, but as much as they loved hearing him, Ronnie was heard to say, “I wish everyone could have as much fun as I do while I’m playing!” We did, Ronnie, we did! Graveside services will be held at 2:00 p.m. on Tuesday, October 13, 2020 at Memorial Gardens Cemetery in Jones County. Due to the Covid-19 pandemic, face masks and social distancing is suggested. To sign the online guest book, visit www.memorychapellaurel.com.

The family of Ronald David "Ronnie" Goss created this Life Tributes page to make it easy to share your memories.

Send flowers to the Goss family.