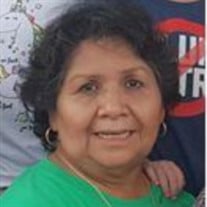 Rosie Mae Chapman Sorrells, 68, of Laurel, passed away on February 4, 2021 at her residence. She was born on June 21, 1952 in Philadelphia, MS. She graduated from Northeast Jones High School in 1971. She attended Jones County Junior College from 1973-1975. She enlisted in the Mississippi Army National Guard in 1978 where she served for 34 years. She was deployed at the age of 58 to serve in Afghanistan in 2010. She returned home in 2011, and decided to retire from the National Guard in 2012. She was a stay-at-home mom for the early years of her children’s lives; however, in 1996, when her children were in school, she decided to work for the MS Band of Choctaw Indians where she was also a tribal member. She worked as an Adult Education Assistant Teacher and helped many Native Americans succeed in receiving their GEDs. She retired from the tribe after only 16 years because she wanted to stay home and care for her grandson, Shaun. She was married to Everett Price Sorrells, Jr for 39 years. She is preceded in death by her parents Frank Asa Chapman and Mary McMillan Chapman; sisters, Theresa Chapman Willis, Mary Jane Chapman Vaughn; brother, John Mingo, and two nephews, Adam Billy, Jr and Myron Todd Chapman. She is survived by her two children, Mary Elizabeth Sorrells and Franklin Price Sorrells; one step-son, Everett Cody Sorrells; grandchildren, Dalton Sorrells and Shaun West; five sisters, Shirley Chapman Briscoe, Betty Jane Sutton, Trudy Mae Chapman, Annie Chapman Jalalzadeh, and Norma Chapman Davis; brothers, Gene Ray Chapman and Claude James Chapman, and a host of nieces and nephews. Rosie enjoyed going to church at Immaculate Conception Catholic Church every Sunday with her sisters, Annie Jalalzadeh and Betty Sutton and having coffee afterwards. She loved her family so much and enjoyed spending all day every day with her grandson, Shaun, whom she absolutely adored more than life itself. The graveside service will be held at 2 p.m. on Thursday, March 4, 2021, at the Choctaw Cemetery of the Bogue Homa Indian Reservation in Heidelberg, MS where she will be laid to rest along with her husband, Everett Price Sorrells, Jr. To sign the online guest book, visit www.memorychapellaurel.com.

Rosie Mae Chapman Sorrells, 68, of Laurel, passed away on February 4, 2021 at her residence. She was born on June 21, 1952 in Philadelphia, MS. She graduated from Northeast Jones High School in 1971. She attended Jones County Junior College... View Obituary & Service Information

The family of Rosie Mae Sorrells created this Life Tributes page to make it easy to share your memories.

Rosie Mae Chapman Sorrells, 68, of Laurel, passed away on February...

Send flowers to the Sorrells family.