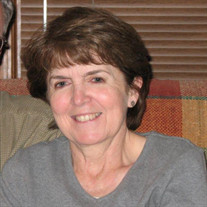 Sherryl Fleming Decker died at her home in Roswell, Georgia, on Monday, July 13, 2020, after a long struggle with Alzheimer’s disease and chronic debilitating pain at the age of 73 years. Born on July 5, 1947, in Hattiesburg, Mississippi, she grew up in Laurel, Mississippi, in a special time and special place. During her long struggle, she was lovingly cared for by her devoted husband and soulmate, Edward Reddy Decker of Roswell, Georgia. Sherryl and Ed have been married for 51 wonderful years, still “going steady” since the beginning of tenth grade at R.H. Watkins High School in their beloved hometown of Laurel, Mississippi. For many years they lived on the Mississippi Gulf Coast, raising their family there before relocating to the Atlanta area, and settling in Roswell, Georgia. In addition to her husband, Sherryl is survived by her son, Christopher Dylan Decker of Atlanta, Georgia, and her daughter, Leigh Decker Jones, and two grandchildren, William Edward Jones and Katelyn Leigh Jones, all of nearby Alpharetta, Georgia. She was preceded in death by her loving and proud parents, Rodney Houston Fleming and Grace Holston Fleming of Ellisville, Mississippi, formerly of Laurel. Sherryl was a special and irreplaceable presence in the lives of her family and friends, and she will be dearly missed by all. Sherryl received a BS from Mississippi State College for Women, and an MLS from the School of Library Science at the University of Southern Mississippi. She enjoyed a long and satisfying career as a professional librarian, first as school librarian at Westminster Academy in Gulfport, Mississippi, then at Brandon Hall School in Dunwoody, Georgia, and finally at St. Francis High School in Alpharetta, Georgia until her retirement. During her career she also served as technical librarian in the regional library of the Environmental Protection Agency in Atlanta, and as developer of children’s collections for the Lake Lanier Library System in Lawrenceville, Georgia. She was a dedicated and creative educator who delighted in inspiring students and fellow faculty alike. She was loved and admired in every place that she worked. Throughout her career she touched many lives with her skillful instruction, gentle excitement for knowledge and learning, and her unselfish compassion for others. Her family will miss her unfading positivity and lively spirit. Sherryl never heard a dance song she didn’t love. She could cut a groove to songs from the 60’s to the 2000’s, but she had a special love for 70’s and 80’s pop. Sherryl, literally, taught generations of her family how to dance! Her famous rule for social gatherings was, “Never let the music stop!” That rule and her jubilant presence has defined her family’s holiday gatherings, parties, and celebrations for decades. With heavy heart, we watched as Alzheimer’s disease slowly chipped away at Sherryl’s essence and identity. We lost pieces of her and our shared family experience to the fog and haze. Slowly and relentlessly our favorite recipes, family stories, long running jokes, those trips to New Orleans, and eventually the dancing were all forgotten. Yet, late in the disease, she could still stay positive and instructively remind us, “Well, things could be worse.” She will be deeply missed, but always remembered. Roswell Funeral Home will be handling initial arrangements, however due to current coronavirus safety precautions, there will be no public visitation or service. Instead, a private memorial service will be held for the immediate family. Final arrangements in Laurel, Mississippi, will be handled by Memory Chapel Funeral Home, and she will be laid to rest in Lake Park Cemetery in Laurel, in the Decker Family plot with a private gathering of her immediate family at graveside. In lieu of flowers, the family requests that memorial contributions be made to the Alzheimer’s Association, 225 N. Michigan Avenue, Chicago, IL 60601; or online at www.alz.org . Contributions to this cause will be especially appreciated by Sherryl’s family. To sign the online guest book, visit www.memorychapellaurel.com.

Sherryl Fleming Decker died at her home in Roswell, Georgia, on Monday, July 13, 2020, after a long struggle with Alzheimer&#8217;s disease and chronic debilitating pain at the age of 73 years. Born on July 5, 1947, in Hattiesburg, Mississippi,... View Obituary & Service Information

The family of Sherryl Fleming Decker created this Life Tributes page to make it easy to share your memories.

Sherryl Fleming Decker died at her home in Roswell, Georgia,...

Send flowers to the Decker family.