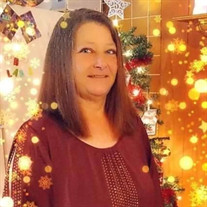 Tenadra “Tina” Soley Sims Tina Sims was born July 9, 1969 in Houston, Texas. After a short battle with Cancer, she went to be with The Lord on April 29, 2022 at the age of 52. A memorial service will be held Monday, May 2, 2022, at Memory Chapel. Visitation to start at 4:00 p.m. with the service following at 5:00 p.m. She was preceded in death by her son, Christopher Chuck Davis, and her father, Carl Soley Sr. Survivors include her mother, Ruby Sumrall Key of Sandersville; son, Michael (Heather) Dennis of Sandersville; step-daughters, Amanda Sims of Ohio, Sasha (Lacey) Sims of Laurel, and their father, William Sims; sisters, Linda Woods of Laurel, Sheila Seals of Laurel, Cynthia Wood (Earl) of Laurel, Bonita (Michael) Flynn of Sandersville, Theresa (Duran) Woodward of Ellisville; brother, Carl (Shelly) Soley Jr. of Hardin, Tx; grandchildren, Damian Allday, James Allday, Stormi Roberts, Landon Dennis, and a host of nieces and nephews. She enjoyed gardening and was proud of her Angel Trumpets. She was employed at Sanderson Farms in Laurel. The family would like to thank the staff at South Central Regional Medical Center for the prayers, hugs, and the shoulders to cry on during her stay. To sign the online guest book, please visit www.memorychapellaurel.com

The family of Tenadra (Tina) Y. Sims created this Life Tributes page to make it easy to share your memories.