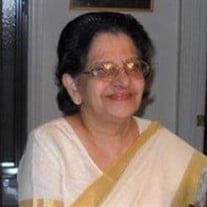 Verita Pamela “Rita” Barclay, age 89 of Laurel, MS, sadly passed away on Sunday, July 25, 2021. She was preceded in death by her husband Benjamin Barclay. She is survived by her son Vivek Barclay (Susan) a practicing physician in Laurel MS, and grandchildren Ian Barclay of Jackson, MS, Nathan Barclay of Starkville, MS and Jordan Barclay of El Paso, Texas. She was born to Jane Paul and Herbert Joseph from Kerala, India on April 12, 1932. Mrs. Barclay was one of eight siblings and the youngest of five daughters. She graduated from Victoria College in Palghat, India with a bachelor degree in science. Mrs. Barclay was a very prominent science teacher at St. Josephs Convent all Girls High School in Jabalpur, India, where she served for close to 35 years. Her specialty was biology but she also was proficient in chemistry and physics. She trained and educated many young students that later became physicians around the world. She was considered the premiere tutor for students aspiring to be physicians in furthering their careers. When she finally retired the outpouring of love and affection from her students was, to put it mildly, astounding and the entire school took an entire day celebrating a remarkable career focused on improving the lives of so many young people. Her altruistic nature was without doubt one of her greatest qualities. After retiring and moving with her family to the United States, she continued to keep in touch with her students. Also, it brought her great joy to see her son and his family succeed in life. She was the recipient of several awards throughout her career including best teacher awards and it was not infrequent for her students to particularly request her blessings before they moved onto bigger and greater things. She never ceased to continue her activities of charity also which she supported in India including donations to churches and older folks’ homes including people whom she grew up with. She also supported several Christian ministries regularly. The outpouring of love and affection has been so overwhelming since she passed peacefully surrounded by loved ones and only son. She was truly blessed, in that after her 89th birthday, she felt it was time for her to be in her final resting abode, as her husband had moved on years before. She was also an extremely talented artist, painter, loved crochet work and was also a gifted singer. She loved cooking and gardening. She will definitely be missed not only by her immediate family but also but the numerous relatives that she most willingly helped in times of need without once expecting any sort of reciprocity in return. Many of her students have posted so many condolences and lovely articles about her on social media and Facebook of which she had literally hundreds of friends. Even though she was a diminutive physical figure she was a giant among giants and vicariously has touched so many lives all across this world. She was like the mighty oak that gave shade to so many through her deeds. She definitely has left this world a better place and our loss is heavens gain. Services will be conducted at Memory Chapel Funeral Home on Saturday, July 31, with visitation beginning at 1:00 p.m. and the funeral service at 2:00 p.m. Burial will follow at Lake Park Hills Cemetery. The service will be officiated by Pastor Thomas Winn. Serving as pallbearers are Ian Barclay, Nathan Barclay, Jordan Barclay, Michael Keys, Sajan Mathews and Sanu Mathews. In lieu of flowers, memorial contributions may be made to Jackson Youth Organization EnrichMS.org. To sign the online guest book, visit www.memorychapellarrel.com.

Verita Pamela &#8220;Rita&#8221; Barclay, age 89 of Laurel, MS, sadly passed away on Sunday, July 25, 2021. She was preceded in death by her husband Benjamin Barclay. She is survived by her son Vivek Barclay (Susan) a practicing physician... View Obituary & Service Information

The family of Verita Pamela "Rita" Barclay created this Life Tributes page to make it easy to share your memories.

Send flowers to the Barclay family.