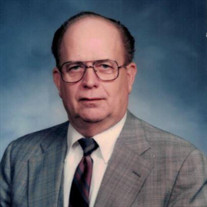 Walter Major Holifield was born in the midnight hours March 24, 1930, the 13th child of Frazier Floyd Holifield, and the 8th child of Cora Ann King Holifield. He passed away in the midnight hours of April 14, 2021 at the Forrest County Hospital, Hattiesburg, Mississippi. He was a lifelong citizen of Laurel, attended Laurel schools and was active in junior high and high school sports, playing football and running track. Active in other High School activities, he was president of the Debating Club, Editor of the high school newspaper, American Legion Contest Public Speaking Champion for Jones County in 1948 and was elected President of the Mississippi Latin Conference, was on the honor roll, a member of the football team and track team. Major graduated from George S. Gardiner High School in 1949 and was an active member of the Reunion Committee for many years Following graduation he was employed as an announcer and studio engineer for radio station WAML until he enlisted in the United States Air Force in October 1950. Major was appointed Leader of his group of men who were enroute to Induction Stations from Laurel to Jackson, Mississippi. He went to Hawkins Field in Jackson, Mississippi, Lakeland Air Force Base, San Antonio, Texas, and Shephard Air Force Base, Wichita Falls, Texas and back home for Christmas. He returned to Denver, Colorado in January 1951, had a 10 day leave and reported to Panama City, Florida. In October 1951, he reported to Camp Stoneman, Pittsburg, California and boarded the Ship, the USS Walker, to YokoHoma, Japan and arrived at K-10 Mason, South Korea where he spent the next year. He was stationed in Roswell, New Mexico where he was honorably discharged in October 1954. Following his discharge in October 1954, he earned a degree from Jones County Junior College and a BS degree in Psychology from the University of Southern Mississippi. He attended Vanderbilt Law School in Nashville, TN and later received a law degree from Jackson School of Law. He began a private law practice September 15, 1962 and retired May 31, 1994. He served as Municipal Court Judge for the City of Laurel, Colonel on two governors’ staffs, was inducted into the Order of the Arrow Boy Scouts, served as Scout Master for 12 years, taught Sunday School, Royal Rangers, served on the local church board and as trustee for Southeastern Bible College, Lakeland, Florida. He was a second-generation member of Kingston Assembly of God Church, a member of the Jones County Bar Association, Mississippi and American State Bar Associations and the Mississippi Bankruptcy Conference. He was recognized by the Mississippi Bar Association for 50 years membership. He was a stockholder, officer and director of the family owned radio business. Major was an avid golfer, enjoyed gardening for many years, was awarded Yard of the Month twice. He spent many hours with his family, especially his grandchildren, and has written several children’s books for them. He was preceded in death by his parents, seven brothers, Lavert Darwin, Ray Clifton, William Franklin and twin, Ralph Alonzo, Frazier Harold, Thomas Joshua and Alfred Raymond, five sisters Margaret Magdalene, Myrtle Armindy, Daisy, Mary Inez and Frances Clarice. He is survived by his wife of 66 years, Jean Heptinstall Holifield, one daughter, Deborah Carol Blakeney and husband, Larry Blakeney, one grandson, Brandon Keith Blakeney and one granddaughter, Amanda Carol Blakeney, two sisters, Anne Marie West and Doris Wilson, one sister-in-law, Jannis Baird, and numerous nephews and nieces. Pastor Scott Davis, Kingston Assembly of God Church, is in charge of services to be held at Memory Chapel Funeral Home Monday, April 19, 2021, with visitation at 10:00 a.m. preceding services at 11:00 a.m., interment in Hickory Grove Cemetery. To sign the online guest book, visit www.memorychapellaurel.com.

The family of Walter Major Holifield created this Life Tributes page to make it easy to share your memories.

Walter Major Holifield was born in the midnight hours March 24,...

Send flowers to the Holifield family.