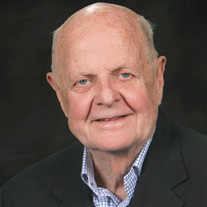 William Spurlin Burton, 85, passed away on December 31, 2021. He graduated from the University of Mississippi with a degree in gemology. Subsequent to graduating, he returned to Laurel where he worked as a certified gemologist at Burton’s Jewelers and later owned and operated the family business for decades. Bill was a dedicated member of First United Methodist Church in Laurel. He served on numerous boards in Laurel, including Howard Industries, Trustmark Bank, Laurel Airport Authority, and the Animal Rescue League. Throughout his life, Bill enjoyed many hobbies. Flying a plane (where he volunteered Angel flights), flying a helicopter, scuba diving, and fishing at his lake place. Bill was preceded in death by his wife of 62 years: Gweneth Todd Burton, his parents: father- Richard A. Burton, Sr., mother- Georgie Spurlin Burton, brother- Richard A. Burton, Jr., and granddaughter- Gweneth Hope Robinson. He is survived by son- William Stephen Burton (Cassie), daughters- Stacy Burton Davis (Kevin), Shara Burton Franklin (Mark) and Susan Burton Robinson (Brett); eight grandchildren- Christopher, Todd, Brooks, Whitney, Alex, Turner, Mary Brett, Lucy, numerous great grandchildren, nieces, nephews, and his adoring dog, Lulu. Bill will be forever missed, but we take great comfort knowing that he is happily reunited with the love of his life, our beautiful mom. His legacy of love for his family will be forever cherished by us all. A service will be held for family on Sunday, January 9, 2022, at First United Methodist Church, Laurel. Memory Chapel is assisting with the arrangements. In lieu of flowers, the family suggests supporting a local animal shelter or donations to his wife’s favorite charity, St. Jude’s Children’s Research Hospital. To view and sign the online guestbook, please visit www.memorychapellaurel.com

William Spurlin Burton, 85, passed away on December 31, 2021. He graduated from the University of Mississippi with a degree in gemology. Subsequent to graduating, he returned to Laurel where he worked as a certified gemologist at Burton&#8217;s... View Obituary & Service Information

The family of William Spurlin Burton created this Life Tributes page to make it easy to share your memories.

Send flowers to the Burton family.