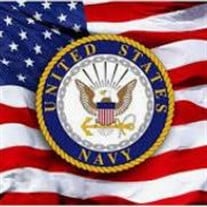 William Edgar “Bill” Prestridge, Jr., of Hattiesburg, MS passed away on Thursday, February 20, 2020 at the age of 91. He was born June 2, 1928 in Meridian, MS to William Edgar Prestridge, Sr. and Aileen Prestridge. He served in the U. S. Navy on the USS Boxer. He was proud to serve his country in World War II and in the Korean Conflict. He also served as a Pilot in the Civil Air Patrol. He was a member of 38th Avenue Baptist Church in Hattiesburg, MS. “Daddy Bill” and “Mr. Bill”, as everyone called him, loved the Lord with all his heart and served many years teaching the Adult Sunday School class and serving as Deacon before moving to Hattiesburg. If you were around him very long, you knew that he loved to talk about his family and was especially proud of all of them. Visitation will be from 9:00 a.m. to 11:00 a.m. on Monday, February 24, 2020 at Memory Chapel Funeral Home in Laurel, MS. Funeral service will be at 11:00 a.m. with Rev. Jimmy Hill and Dr. Kevin Shearer officiating. Following the funeral, a graveside service will be held at the Myrick Cemetery. He was preceded in death by his parents and three sisters: Mary Alice Booth (Edward); Jean Williams (Buddy) and Minnie Rose Galyean (Floyd) all of Meridian, MS. He was also preceded in death by his wife, Marie (Williamson) Culpepper Prestridge; and Martha Nell (Wood) Walters Prestridge who was the love of his life. He is survived by three daughters: Janet W. Neal, Vicksburg MS; Mamie D. Walters, VanAlstyne, TX, and Cindy Rawls, Hattiesburg, MS; four grandchildren: Christina Boudreaux (Josh), Ana Shelley (Justin), William Driskill (Kayla), and Lindsey Driskill; four great-grandchildren and a host of nieces and nephews. Pallbearers will be: William Driskill, Shaun Galyean, Bruce Hall, Mark Henderson, Josh Boudreaux and Jim Braswell. Honorary pallbearers will be the Deacons of 38th Avenue Baptist Church and Rev. David Hulsey. We would like to extend a personal thank you to Dr. Terry Lowe, the nurses and staff of Kare-in-Home Hospice, and his personal caregivers who have extended their care and love to our family for the past three years. In lieu of flowers the family requests that donations be designated, in his honor, to the Missions Team at 38th Avenue Baptist Church, 419 North 38th Avenue, Hattiesburg, MS 39401.

The family of William Edgar "Bill" Prestridge, Jr. created this Life Tributes page to make it easy to share your memories.