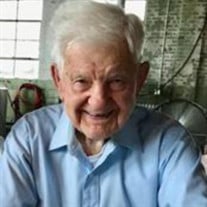 William (Bill) F. Dripps, loving husband, father, grandfather, WWII veteran and friend died at the hospital October 8, 2020 in Laurel, MS at the age of 101. He leaves behind four children: Ned F. Dripps (Kate), James M. Dripps (Kathy), Ellen R. Dripps and Carol E. Schwalbe (Steve); six grandchildren and 14 great grandchildren. Bill was pre-deceased by his wife of 67 years, Rosella (2016) and his sisters Joan Ketchen (2007) (Eddie) of Meddybemps, ME and Lois Starr (2014) (Ray) of Ringwood, NJ. He was also pre-deceased by a great grandson, Nolan (2012) and a granddaughter, Samantha Dripps (2019). Bill was born in 1919 in Redwood Falls, MN to the late Ned F. and Ella Y. Dripps. He moved very early in life to CA with his parents and lived in the Riverside and San Bernardino areas. Bill married Rosella D. Silk in 1949 in Ft. Wayne, IN where he had taken a job with General Electric (GE) after receiving his college degree. Bill and Rosella knew each other for just two weeks before Bill proposed. After marrying, Bill and Rosella left Ft. Wayne for a job with GE in Pittsfield, MA, where they lived for 21 years raising their family. Later they moved to Pittsburgh, PA for five years and spent the last 45 years in Laurel, MS. Bill was a very accomplished electrical engineer who graduated from the University of California, Berkeley after WWII. During the war, he served in the U.S. Navy for three years aboard aircraft carriers performing radar maintenance for the aircraft squadrons, on the USS Wasp and subsequently on the USS Intrepid until January 1946. He met his best friend on the USS Wasp, Eddie Ketchen (2014), who became his brother-in-law as he married Bill’s sister, Joan. Bill worked as an electrical engineer for General Electric in Pittsfield, MA where he met Billy Howard of Howard Industries, Laurel, MS. Bill went from Pittsfield to Pittsburgh where he worked for Allis-Chalmers, then in 1975 to Laurel, MS to work for Billy Howard as the Vice President in several Engineering positions until 1987. He formally retired in 1988 but went right back to work as a Consultant at Howard Industries until 2005 at the age of 86. Bill always worked as a Senior Engineer specializing in Power Transformers for all three of his employers during his long career. Electrical engineering and mathematical theory were his passions and his “hobby”. He never tired of work and Rosella always had a home cooked meal for him when he came home. He was a very proud and hard-working man described by his colleagues as “a special man” and his successor describes him as “the most intelligent guy I ever worked with”. According to Billy Howard, Chairman and CEO of Howard Industries, Inc. “I am proud to have called Bill Dripps my friend for over 55 years. His intelligence and knowledge in his field was unparalled. Bill was a great engineer and mathematician, but more importantly he was an amazing person and friend. My life and that of my family has been immeasurably enriched by having known Bill. There is no doubt that his ideas, innovations, and improvements helped Howard Industries propel from number 23 in the distribution transformer industry to number one. Bill will be missed by everyone here, but most especially by me.” Bill loved to camp with his children beginning at a very early age. He continued to camp with Rosella until the early 2000’s. Bill and Rosella saw a lot of the US this way and loved every minute of being outdoors walking and hiking. Bill was always a huge walker, perhaps a reason why he lived to 101. He walked miles everywhere he lived and hiked many of the mountain ranges in the northeast including many miles on the Appalachian Trail. He got his entire family into skiing in Massachusetts when the children were young. Skiing became a very large part of the family’s life and Bill skied into his early 70’s. Bill’s hobbies later in life continued to be math theory and he added wood carving and dabbling in some gardening. He would compete with a neighbor on who could grow the best green beans. He was always in his garage all day long puttering with something. He loved to take things apart, including computers, to find out how things worked. He could write code and program a computer, which is rare for a person of his age. He could fix anything and neighbors often brought him items to fix and he would have the spare part in his garage for repair. He also took care of the widows in his neighborhood making sure they were safe in their homes and helping them with home repairs. Bill loved his country and really cared about others, their wellbeing and went out of his way to help. He could always be counted on when things got tough. He loved life and enjoyed every minute. Arrangements will be private and the family asks that if you would like to make a donation in his name, please donate to your favorite charity. To sign the online guest book, visit www.memorychapellaurel.com.

The family of William Foster Dripps created this Life Tributes page to make it easy to share your memories.

Send flowers to the Dripps family.