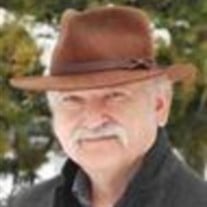 William C. McLaurin, 66, of Sandersville, passed away on the 23rd of February 2021. Will was a veteran of the US Navy traveling around the world aboard the USS Emory S Land. As a chaplain’s assistant he was able to meet Pope John Paul II while in Italy. After leaving the Navy and attending Columbia Theological Seminary he met with Archbishop Desmond Tutu. Will took these experiences to heart and returning to Mississippi always strived to imbue the radiant positivity of Christ’s love and the importance of the lifelong pursuit of knowledge and education in the hearts of all he met. Serving as a pastor for the United Methodist Church committed to outreach for rural communities and small churches, he ministered to the communities at Grandview UMC, Soules Chapel UMC, Ovett UMC, Kingston UMC, Stringer UMC, Batson UMC and New Augusta UMC. Will married the love of his life and best friend Mary Jean McLaurin in December of 1981 and the two were rarely ever apart. He is survived by his wife, his daughter, Vicki Wooten, as well as his daughter Robin Berlin, her husband Don Berlin, and their daughters Isabelle McLaurin and Lexi Berlin. Will is also survived by his niece Alison Vanderslice, her husband Jason Vanderslice, and their children Zoe and Carson, as well as his nephew Sean McLaurin, his wife Idalia, and their sons Armando, Joey, Terry, and Scott. He was preceded in death by his parents A.G. and Edith McLaurin and his brother Rev. Dr. L. Gilbert McLaurin of the Presbyterian Church USA. Services will be held at Memory Chapel Funeral Home on Monday, March 1, 2021 with visitation at 10 a.m. and the service to follow at 11 a.m. Interment will be at Erata Cemetery. To sign the online guest book, visit www.memorychapellaurel.com.

William C. McLaurin, 66, of Sandersville, passed away on the 23rd of February 2021. Will was a veteran of the US Navy traveling around the world aboard the USS Emory S Land. As a chaplain&#8217;s assistant he was able to meet Pope John Paul... View Obituary & Service Information

The family of William McLaurin created this Life Tributes page to make it easy to share your memories.

William C. McLaurin, 66, of Sandersville, passed away on the...

Send flowers to the McLaurin family.