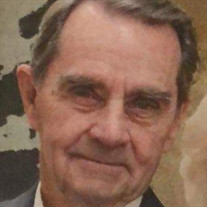 William Jerry Piercey, age 85, passed away peacefully in his home in Blue Springs, Missouri on September 7, 2021. Jerry was born on July 4,1936 to the late Dalton Hershel and Willie Mae Piercey in Memphis, Tennessee. He graduated from Humes High School, Memphis, Tennessee in 1955. Jerry accepted the Lord as Savior right before he graduated from High School and while attending Bible Baptist Church in Vallejo, California he surrendered his life to ministry. He then moved to Springfield, Missouri where he attended Baptist Bible College and graduated with a Bachelor of Theology. He and his wife Shari were approved as Baptist Bible Fellowship Missionaries to Ethiopia, Africa in January 1965, arriving in Ethiopia in September of 1966. They served there for 10 years as church planters, only leaving when the communist takeover of that country made it impossible for them to stay. From 1976 to 1979 Jerry worked as a Missions teacher and recruiter for Baptist Bible College West, Denver, Colorado. In 1979 he was reinstated as a missionary to Kenya, East Africa and served there until December 2003. They then served as S.M.O.R.E.S. (temporary relief) missionaries, serving in six countries and the State of Alaska before retiring in 2015. Jerry was a faithful member of Overland Park Baptist Temple, where he sang in the choir and served in other activities at the church including: substitute teaching, nursery duty on occasion and preparing food for kids in the Upward Basketball Program. Preceding him in death were his brothers Harold and George Piercey. He is survived by his wife of 61 years, Shari Joplin Piercey, Blue Springs, Missouri. He is also survived by his four children: Lisa Holcomb (Steve) of Cotopaxi, Colorado, Jerry Piercey of Enterprise, Alabama, Lora Kirkpatrick (Lenny) of Charleston, Illinois and Steve Piercey (Valerie) of Blue Springs, Missouri. Also surviving him are his 10 grandchildren: Keith, Aaron (Amy), Sharla, Dalton, Blair, Cheyenne, Logan, Josiah, Imani and Will and 5 great grandchildren: Eliana, Alexandria, Julion, Brooklyn and Lucas. Pallbearers will be Keith and Aaron Holcomb, Dalton Piercey, Blair Piercey, Josiah Piercey, and Greg Holifield. The family wishes to thank the staff from Kindred Hospice for their compassion, love and support during these past weeks. Services will be held at Pleasant Ridge Baptist Church, on September 18, 2021 at 11:30 a.m. Visitation will begin at 10:00 a.m. prior to the service. Interment immediately following the service at the adjoining cemetery. Bro. Roy Crouch will officiate. In lieu of flowers the family requests donations be made to the Baptist Bible Fellowship International at 720 E Kearney St. Springfield, Missouri 65803, labeled “Mission Projects Fund Jerry Piercey Memorial”. To sign the online guest book, visit www.memorychapellaurel.com.

William Jerry Piercey, age 85, passed away peacefully in his home in Blue Springs, Missouri on September 7, 2021. Jerry was born on July 4,1936 to the late Dalton Hershel and Willie Mae Piercey in Memphis, Tennessee. He graduated from Humes... View Obituary & Service Information

The family of William Jerry Piercey created this Life Tributes page to make it easy to share your memories.

William Jerry Piercey, age 85, passed away peacefully in his...

Send flowers to the Piercey family.