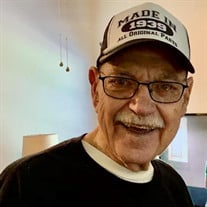 William Sidney Easterling, 82, entered into the presence of Jesus, his Lord and Savior on November 13, 2021 in the comfort of his home in Laurel, Mississippi. He was born on May 25,1939 in Detroit, Michigan. Sid, as he was fondly called, retired from the US Army as a Lieutenant Colonel after 31 years of service. He was a veteran of the Vietnam War, where he was awarded the Combat Infantry Badge and the Bronze Star. Later, he was awarded the Legion of Merit, which was presented by General Norman Schwarzkopf of Iraq War fame. In addition, he was awarded the Joint Service Commendation Medal, Army Commendation Medal, National Defense Service Medal, and the Armed Forces Expeditionary Medal. During his life, he was a devout Christian and was dedicated to his family, country and community. He served in church as a Deacon, Sunday School teacher, and a servant in any capacity asked of him. Sid was especially fond of the years he served as a coach and umpire for various sports programs in the Laurel area. He is survived by his faithful wife of 63 years, Sandra Walters Easterling; his son, William Easterling, and his wife Debbie; daughter, Joy McKnight, and her husband Jerry; his brother, Nelson Easterling; his six grandchildren; and his nine great-grandchildren. He is preceded in death by his father Louis Claude Easterling; mother, Aline Watson Easterling; daughter, Cynthia Louise Hamilton; and granddaughter, Amber Marie Easterling. Visitation will be held at Indian Springs Baptist Church in Laurel, Mississippi on November 17, 2021 from 10:00 AM to 11:00 AM. A Funeral Service will follow at 11:00 AM, followed by a family burial in the church cemetery. Dr. Richard Clark, pastor of Indian Springs Baptist Church will officiate. The pallbearers are Greg Easterling, Jerry McKnight, Michael Hamilton, Benjamin McKnight, Daniel Starbuck, Jay Smith and Honorary Pallbearers are Nelson Easterling and Issiah Miles. The family wishes memorial donations be made to Indian Springs Baptist Church: 500 Indian Springs Church Road, Laurel MS 39443 www.isbclaurel.com or Forrest General Hospital Hospice Services: PO Box 19010, Hattiesburg, MS 39404 www.fghfoundation.com. Funeral arrangements are provided by Memory Chapel Funeral Home. To sign the online guest book, please visit, www.memorychapellaurel.com.

William Sidney Easterling, 82, entered into the presence of Jesus, his Lord and Savior on November 13, 2021 in the comfort of his home in Laurel, Mississippi. He was born on May 25,1939 in Detroit, Michigan. Sid, as he was fondly called, retired... View Obituary & Service Information

The family of William Sidney Easterling created this Life Tributes page to make it easy to share your memories.

William Sidney Easterling, 82, entered into the presence of Jesus,...

Send flowers to the Easterling family.