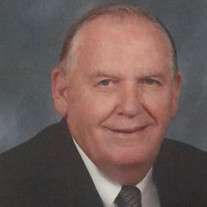 Wilroy Ratcliff, 85, of Laurel, died Thursday, July 23, 2020, at Brookdale II Assisted Living Facility in Hattiesburg where he had been a resident for three years. Due to the current situation with regards to COVID-19, there will be no scheduled visitation. A graveside service will be held at Lake Park Hills Cemetery in Laurel on Sunday, July 26, at 1:30 p.m. His former pastor, Rev. P. J. Weeks, will officiate. If you plan to attend the service, please consider wearing a mask. A native of Lincoln County, he was born March 25, 1935, to the late Rance Scott and Ovelia (Lofton) Ratcliff. After a seven-year courtship, he married his Brookhaven High School sweetheart Kathryn Hoggatt on September 21, 1957. With great pride, Mr. Ratcliff enjoyed telling the story of how he married the only girl he ever kissed. Mr. Ratcliff was a proud member of the 1953 senior class of Brookhaven High School where he was a three-sport letterman in basketball, football and track. He was the Big 8 Conference champion as a mile runner and, at one point, held the state record in that event. He then graduated from Copiah-Lincoln Junior College where he also won the state championship as a mile runner. Mr. Ratcliff attended Howard College, now Samford University, in Birmingham, Ala. where he earned a degree in pharmacy. After college, Mr. Ratcliff was hired as a pharmacist for Southwest Drug Stores in Jackson. In January 1960, Southwest offered him the opportunity to move to Laurel as the manager/pharmacist of their store located in the Gardiner Center. He told his children that he was so impressed with his three-day visit to Laurel as a high school senior playing in the Big 8 basketball tournament held at the Wisner Building that he did not hesitate to make the move. In 1965, Mr. Ratcliff joined E. R. Squibb & Sons as a pharmaceutical sales representative. During his nearly 30-year career with Squibb and Bristol-Myers Squibb, he earned numerous company honors including being a six-time Go-Getter Award winner as the top salesman in his region. Mr. Ratcliff was also inducted into the Hakeem Society of Bristol-Myers Squibb, an honor reserved for the company’s elite salespersons. Mr. Ratcliff served for many years as an advisory board member for the Samford University School of Pharmacy, was a past board member of the Mississippi Pharmacists Association and a past member of the Jones County Junior College Pharmacy Technology Craft Committee. Mr. Ratcliff was a member of Magnolia Baptist Church where he was a deacon and active in numerous areas including teaching Sunday School, Brotherhood, the Hospitality Committee and Bible Drills. He was also a Mason. His brother, children and their friends have numerous fond memories of Mr. and Mrs. Ratcliff attending their ballgames, band concerts and chaperoning youth group trips. For more than 40 years, the Ratcliffs were fixtures at Laurel High and Jones County Junior College athletic games and fine arts events. In retirement, they enjoyed traveling, especially their twice-yearly visits to Gatlinburg, Tenn. They also participated in volunteer activities with their church. The Ratcliffs were married nearly 57 years until Mrs. Ratcliff’s death in 2014. For the last several years of his life, Mr. Ratcliff battled Alzheimer’s Disease. Although the disease slowly robbed him of his memories, he could still remember and sing the words to several classic Gene Autry and Roy Rogers country and western tunes. This provided many amusing moments for his family and caregivers. Mr. Ratcliff was preceded in death by his wife, parents and sister and brother-in-law Virginia and Donovan Ivy of Tuscaloosa, Ala. Mr. Ratcliff is survived by his daughter Rebecca (Howard) Patrick of Ellisville, sons Wilroy (Leshia) Ratcliff, II, of Mobile, Ala., and Bruce (Belinda) Ratcliff of Columbia; grandchildren Wil (Chelsea) Ratcliff of Tuscaloosa, Ala, Wes (Allie) Ratcliff and his soon-to-arrive great-granddaughter Sadie Laurel of Mobile, Ala., Rease (Danyele) Patrick of Palestine, Tex., Meredith Ratcliff of Franklin, Tenn. and Mallory Ratcliff of Columbia; brother Scott (Judy) Ratcliff of Petal; and several nieces and nephews. The family would like to express sincere gratitude to Cindy Headley and all the staff at Brookdale II for taking care of Mr. Ratcliff for the past three years. They would also like to thank Southern Care Hospice, particularly Sarah Bassett, Wendy Cooley and Rev. David Grayson, for their care of Mr. Ratcliff over the past year. Since March, the staff at Brookdale and Southern Care stepped up and provided Mr. Ratcliff with the love and support that COVID-19 prevented his family from being able to personally give. For that, the family is eternally grateful. Mr. Ratcliff’s sons, son-in-law and grandsons requested the honor of serving as his pallbearers. Memorials in Mr. Ratcliff’s honor may be made to the Ratcliff Family Scholarship Endowment at Jones County Junior College. To sign the online guest book, visit www.memorychapellaurel.com.

Wilroy Ratcliff, 85, of Laurel, died Thursday, July 23, 2020, at Brookdale II Assisted Living Facility in Hattiesburg where he had been a resident for three years. Due to the current situation with regards to COVID-19, there will be no scheduled... View Obituary & Service Information

The family of Wilroy Ratcliff created this Life Tributes page to make it easy to share your memories.

Send flowers to the Ratcliff family.